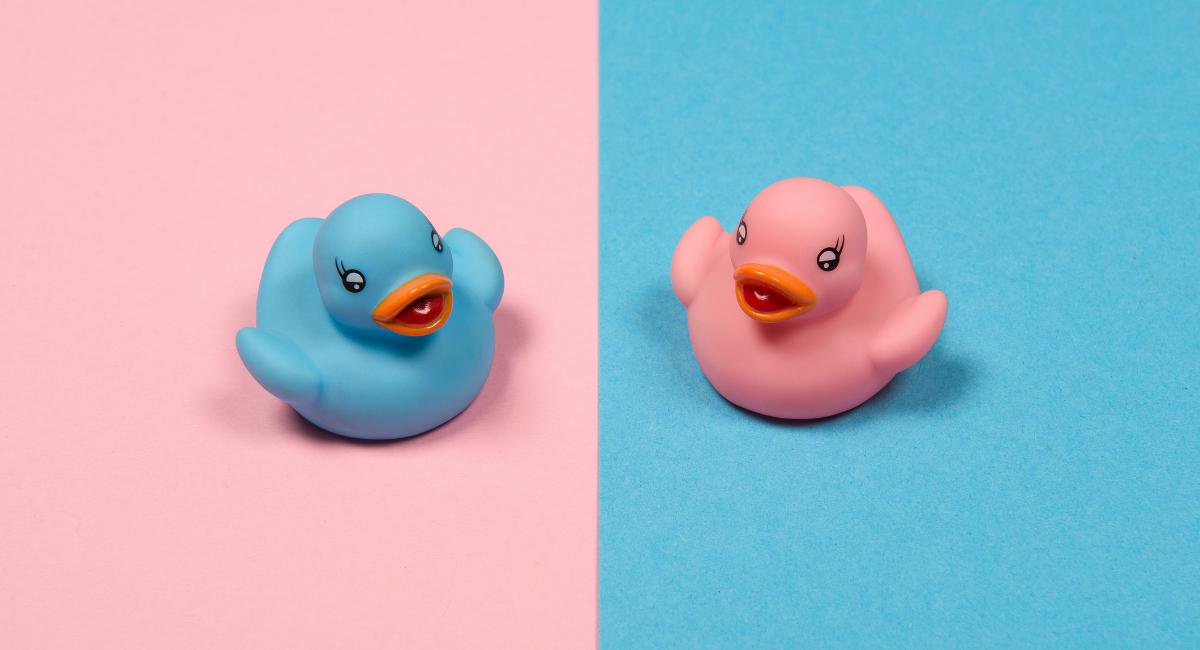 So which is it? Are there differences between men’s and women’s brains – or not?

What is a sex difference?

To clear up the confusion, we need to consider what the term “sex difference” really means in the scientific literature. To illustrate the concept, I’ve used a web-based tool I helped develop, SexDifference.org, to plot some actual data. The three graphs below show how measurements from a sample of people are distributed along a scale. Women are represented in pink, and men in blue. Most people are close to the average for their sex, so that’s the peak of each “bump.” People on the left or right side of the peak are below or above average, respectively, for their sex.

Before we get into the brain, let’s look at a couple of familiar sex differences outside the brain. Many of us, if asked to describe how men’s bodies differ from women’s, would first mention the sex difference in external genitalia. The graph below depicts the number of nontransgender adults that have a “genital tubercle derivative” (clitoris or penis) of a given size.

All of the women in this sample, including our hypothetical Sue and Ann, fall within a certain range. All of the men, including Bob, fall into a different range. With relatively rare exceptions, humans can be accurately categorized into sexes based on this measure.

Next, let’s consider another difference that we can all see and understand: the sex difference in height. Here, we see overlap, depicted in purple. Unless a person is very tall or very short, knowing only that person’s height will not allow us to categorize that person as male or female with much certainty. Yet, even though we all know that some women are taller than some men, we would probably all call this a sex difference.

Now let’s consider a typical sex difference inside the human brain. This graph depicts a sex difference in structural connectivity, or the degree to which networks of brain areas are interconnected, as reported in a recent study (the median effect size from the study is shown). The distributions of values for men and women are essentially the same; they overlap by 90 percent. Sue and Bob have fairly similar values, and Ann’s value is higher than the average man’s.

We can see that this sex difference in the brain is quite different from the sex difference in genital measurements. With only the measurement of brain connectivity, the odds of correctly guessing a person’s sex might be as low as 51 out of 100. Since the odds aren’t perfectly 50:50, this is technically a sex difference. The term means that sex explains a portion of the variability in a trait, not that men take one form and women another. There may be a few more women at one end of the range and a few more men at the other, but for the majority, the trait is not that related to sex.

Small differences such as this one are important. The discovery of any sex difference is valuable for scientists and physicians because it points to other, more meaningful sources of variation. Because the sexes differ according to factors such as genes, hormones, and environment, a sex difference in the brain provides clues about the impact of these other factors on the brain. Following up on those clues helps us understand why susceptibility to disease, efficacy of drugs and even the course of normal development are different among all individuals, not just between men and women.

Despite their relevance to human health, the scientific value of sex differences is rarely discussed in the news media. Instead, sex differences become clickbait for promoting stereotypes. Small differences in the brain have been reported to explain a wide variety of presumably sex-typical behaviors, from hunting to cleaning the house. Although it makes intuitive sense that a difference in the brain must translate to a difference in behavior, there is very little evidence linking any sex difference in the human brain directly to a particular function or behavioral outcome. So think twice before you assume that greater brain connectivity confers better multitasking or map-reading skills.

The graphs above are meant to illustrate why it’s not particularly informative to ask a yes-or-no question like “Do the sexes differ?” We need to ask more sophisticated questions: to what extent do the sexes differ? How much do they overlap?

Any decent scientific report of a sex difference contains all of the information needed to answer these questions. But not many journalists look at the actual report; they often rely on press releases, which may misrepresent the nature and meaning of a difference. As a result, the headlines can turn out to be wrong.

For example, in the 2013 study reportedly showing that men and women differ profoundly, the sexes overlapped by an average of more than 86 percent. And the 2015 study that supposedly showed no sex differences in the brain? The authors never actually made such a claim. In fact, they provided a long list of bona-fide sex differences.

The next time you read about a sex difference, if you have access to the research report you can graph the difference yourself on SexDifference.org. Enter the average value (reported as the “mean”) and variance (reported as the “standard deviation”) for each sex. The tool will automatically draw a graph and calculate the degree of overlap. You can then see for yourself the extent to which the trait is related to sex.

Don’t be surprised if you can’t find the values you need to graph the difference. The authors may not report them, or they may not have actually compared the sexes. Take, for example, the report last year on thermal comfort in office buildings. The media were aflutter for days, explaining why women are always cold at the office. A quick look at the scientific paper itself shows that there were no men in the study at all! This makes calculating the overlap a bit problematic.

Overlap between the sexes may seem so obvious that it needs no discussion. But its underappreciation is leading educators to separate boys and girls into single-sex classrooms in order to accommodate their different brains, and physicians to consider sex, instead of more relevant factors such as body weight, when prescribing drugs. Although well-intentioned, these practices amount to stereotyping because they assume the distribution looks like the top graph above when it may look more like the bottom one.

Nearly every day, new research is published that, if overinterpreted, could be used to promote sex stereotypes. Most neuroscientists are not interested in doing that. The few neuroscientists who do overinterpret their data, often to the great delight of the media and the public, provide fuel for discriminatory practices and cast the entire field in a negative light. The best way to deal with dubious interpretations is to examine the data and draw our own conclusions. The data will speak for themselves.

This article is republished from The Conversation under a Creative Commons license. Read the original article.