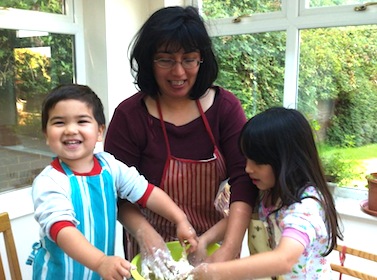 Radha and I first met in Oxford when we both won places on the Wellcome Trust 4-year PhD program in Neuroscience.  Radha’s PhD studies took her on a far more exotic journey than most – few neuroscientists can attest to field work capturing birds in Argentina!

But her story of what came next will be very familiar to many women – the ups, downs and angst of how to mix motherhood with a career in research.   As you’ll see, Radha seems to have found a way to make it work.  And as she points out, women shouldn’t feel guilty for taking a career break to start a family – the global gene pool needs smart women to have babies!

I want to understand how and why you ended up here working as a neuroscientist … what put you on the path to where you are now?

I studied Molecular and Cellular Biochemistry as an undergraduate at Oxford University, and in the final year of my degree, someone came around encouraging us to consider applying for a place on the Wellcome Trust 4-year PhD program in Neuroscience. I’d never really thought about Neuroscience as a career, but had enjoyed the Neuropharmacology module of my biochemistry degree, so with nothing else planned for after graduation, career-wise, I thought “why not?” and applied. Much to my surprise, I was awarded one of the 4-year scholarships and thus began my training as a neuroscientist!

I decided to complete a PhD in the field of neuro-ecology (the relationship between brain structure and the performance of naturally-occurring behaviours in the wild), working with Professor Alex Kacelnik FRS at the Behavioural Ecology Research Group, Department of Zoology. My doctoral project investigated the existence of neural adaptations associated with the performance of brood parasitism in South American cowbirds.

Proof that being a neuroscientist doesn’t necessarily mean being stuck in a lab the whole time!

Studying the behaviour and brains of wild animals was fun and different, and I really enjoyed travelling and living abroad, however I discovered that my neuro-ecology experience was not incredibly useful in terms of finding a job as a neuroscientist after completion of my PhD.

Luckily, I was able to secure my first post-doctoral position at the brand new Systems Neuroscience group at Oxford, working on the anatomy and physiology of midbrain dopaminergic neurons in the ventral tegmental area (VTA). I enjoyed this work but unfortunately my involvement in the project had to end after just 18 months, as the group moved to Imperial College in London.  But I wasn’t willing to relocate over there, and, I’d fallen in love with and married a patriotic Welsh-speaking Welshman, and it was essential for him that we move to Wales so we could bring up a Welsh-speaking family. So we moved to Cardiff, the capital of Wales.

I was fortunate to find a neuroscience job straight away, investigating the impact of dietary DHA on Alzheimer’s Disease (AD). It was during this project that I became pregnant with my first child, Menna. After a full year’s maternity leave, I returned to work on the AD project (part-time) till the end of my fixed term contract. This coincided with the birth of my second child, Mabon and I subsequently took a 2 year career break to look after the children, during which time I had little or no contact with the world of science (beyond socializing with neuroscientist friends).

Having completed our family, and with our youngest about to start nursery, the time felt right to consider a return to a career in neuroscience. Having spent several years being a full-time mum, the prospect of returning to the workplace felt very daunting. I applied for many research positions with no success – often without even a rejection letter. This was at the height of the financial/banking crisis in the UK and jobs were hard to come by in all sectors. Receiving continual rejections was very disheartening, and led me to really question my self-worth. However, with support from my husband, I continued sending off applications and finally, out of the blue, came an interview and a job offer.

I’m now working at the Brain Repair Group at Cardiff University, investigating the use of embryonic stem cell transplantation as a therapy for Parkinson’s Disease (PD).

It’s not always easy juggling the needs of my young family with work, but I’m loving every minute.

I’m really grateful to have gotten the chance to return to science after taking a career break to have a family.

I’m really passionate about being a mum and providing my children with the best environment and lifestyle during their crucial early-years development. For example, I decided to take an extended career break so I could breastfeed both of my children until the time that they and I were ready to stop (around two years in both cases). I absolutely believe that parents should be around for little ones, as much as possible, from birth to three years old, as this contributes greatly to their physical, intellectual and emotional well-being in the long run.

My current job is also a source of great motivation.

I feel privileged to be working in the new and exciting field of cell replacement therapy for neurodegenerative disease.

Our lab is one of the few in the country with access to human fetal brain tissue (donations coming from elective terminations). I often take a moment to think about the significance of the material I work with, when setting up cultures of human fetal brain cells or embryonic stem cells.

The knowledge that the therapies I’m working on could eventually bring real, long-lasting relief from serious, incurable illnesses such as PD keeps me motivated to carry on with my work in the lab.

The broad aim of my research is to develop cell-based therapies (CBT) to treat Parkinson’s Disease (PD). The ultimate goal of CBT is to implant a new population of dopaminergic (DA) neurones to replace those that die in the disease. There are a number of different sources for new DA neurones which could be used in cell-based therapies for PD: for example, human fetal tissue, or human embryonic stem cells (hES).

For our project, we are using hES as a source for new dopaminergic neurones. Previous work has found that grafts of new DA neurones derived from hES do not function or survive as well as grafts of human fetal tissue. To date, researchers are not sure why this is the case. Our hypothesis is that grafts of hES derived DA neurones need the addition of a second population of cells, astrocytes, to function and survive properly.

Astrocytes are a type of glial cell.

Glial cells are a population of very abundant and essential non-neuronal cells in the brain.

Glial cells such as astrocytes have a crucial role, in promoting the survival of neurones and ensuring that they develop and function correctly. Our experimental approach is to add astrocytes to hES derived DA neurones before implanting, to see if this has a positive effect on graft survival and function.

My typical day usually starts around 7 am in the morning at home with the family. The children need to be dressed and fed before setting off to school with their father. I drive into the city to the School of Biosciences at Cardiff University. I’m usually in work around 9am.

I usually start off by firing up the computer and dealing with any urgent emails. Then it’s off to the cell culture lab to check on my cells. Depending on their needs, I can either spend half an hour or 3-4 hours working there.

If the cells are not in need of care, I spend some time on other aspects of the project, e.g. immunohistochemistry in the histology lab or microscopy. Meetings with my boss and colleague occur quite frequently. I am also supervising a student for his final year undergraduate project and that takes up quite a bit of the day. In research, no two days are the same – plans need to be made or modified depending on the progress/results of ongoing experiments.

Thanks to the flexible working policy at the University, I’m usually home between 5 and 6 pm so I can spend time in the evening with the family. I’m currently working a 4 day week to get even more time to spend with the kids. Flexible working means I often go in after normal working hours or at the weekends, for short stints, depending on the needs of my experiment.

Who funds your research ?

My research is funded by a charity, Parkinson’s UK.

What really bugs me is the way neuroscience is reported in the mainstream media. Every scientific result is presented as a major breakthrough, as if basic research from the lab is likely to be translated into wonderful new therapies in the clinic in a matter of weeks or months.

Neuroscientists understand that basic research findings are just the beginning of a long journey towards a possible application in the clinic.

The sensationalist reporting of science leads to unrealistic expectations from the public.Once these unrealistic hopes are dashed, the public becomes wary and suspicious of “science” and scientists. A more balanced and realistic portrayal of scientists and the results of their work would help to create a more healthy relationship between the scientific community and the general public.

Due to longer life expectancy, there’s a strong chance every one of us is affected in some way, or knows someone suffering from a neurodegenerative disease. Research into new therapies depends to a large extent on funding from charities, so please do take a moment to find out more about how you can donate to, or help raise money for, your local Multiple Sclerosis, Parkinson’s Disease, Alzheimer’s Disease or other charity. Every bit of money raised can help us take a step closer towards finding a cure for these debilitating illnesses.

Just wanted to say to all the women scientists out there, don’t feel guilty for taking a break in your career to start a family. The global gene pool needs smart women to have babies!

There are ways back in to a career in science – look out for the various return to work fellowships (e.g. Daphne Jackson) that are available to returning parents. It isn’t easy, but try not to lose confidence in your abilities. You’ve become a parent, but that doesn’t mean you’ve lost all your scientific knowledge and skills. Quite the opposite – you’ve gained new transferable skills from being a mum.