Snakes, fear, and my primal brain 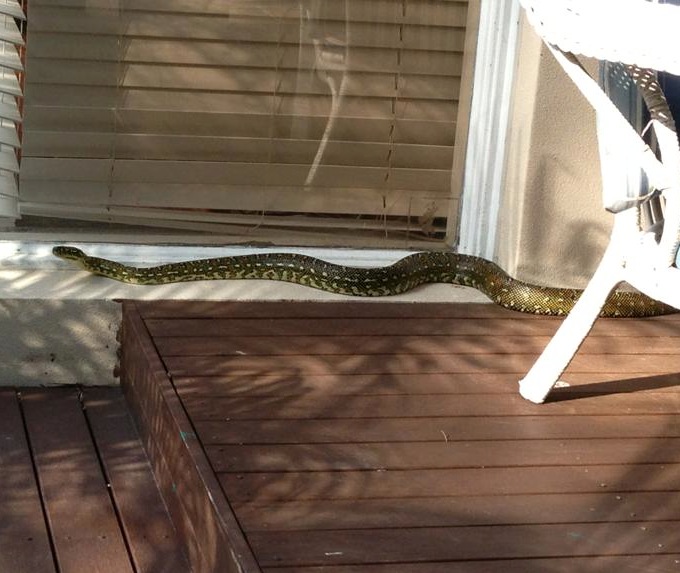 It was a hot hot Friday afternoon three weeks ago when I stepped out my front door to find the fella to the right sunning himself on my front deck. I live in Sydney and our house backs onto a strip of bushland, so we’re blessed with visits from kookaburras, cockatoos, rainbow lorikeets, blue-tongue lizards and water dragons. So it was inevitable we’d eventually meet up with another of the locals – a diamond python.

Diamond pythons are non-venomous and one of the most common snakes around Sydney, and I knew this when I spotted it — knowledge thanks to my 5-year old son’s interest in reading wild-life spotting manuals! Despite the huge fright it gave me, part of me felt very lucky to visited by such a beautiful creature — its lime-green diamond patterned scales (that I got to see up close!) were striking, and it was placid enough that I managed to get quite a few photos.  But for a couple of weeks after, I struggled with walking out the front door without first performing a meerkat-like assessment of our front-yard for dangerous predators.

To try and get to the bottom of my new-found anxiety, I decided to explore some of the literature around snakes and the neuroscience of fear. Here are a few of the more interesting findings I dug up.

Fear is processed by the amygdala

The collection of brain cells responsible for fear are a pair of almond-shaped structures that sit deep within the temporal lobes.  The amygdala (literally ‘almond-shaped’) are part of the limbic system which is evolutionary primitive and involved in fear, emotion, reward and memory.

Neuroscientists have recently examined a woman who goes by the initials S.M. (promise it isn’t me!) who has a rare form of brain damage that has caused her amygdala to harden and die. She has normal IQ, memory, language, and perception, but literally feels no fear. SM’s experience of fear was examined by directly confronting her with ‘fear-inducing stimuli’ — she went on a visit to an exotic animal shop. Despite claming she was scared of snakes and spiders the neuroscientists reported the following:

SM held the snake for over 3 minutes while displaying a wide range of exploratory behaviors: she rubbed its leathery scales, touched its flicking tongue, and closely watched its movements as it slithered through her hands. She repeatedly commented, ‘‘This is so cool!’’

She also attempted to touch a tarantula but had to be stopped because of the high risk of being bitten. When asked why she would want to touch something that she knows is dangerous and that she claims to hate, SM replied that she was overcome with ‘curiosity‘

During the exotic animal shop visit, the neuroscientists asked SM to rate her fearfulness on a scale from 0 (no fear at all) to 10 (extreme fear). Her reported experience of fear never surpassed a rating of 2!

The conclusion was pretty clear — without the amygdala, the primal value of fear is lost!

I’m scared of snakes because they used to eat cavemen!

Apparently our fear of snakes reflects our evolutionary roots. As primates we learned to fear events and situations that once threatened our survival. Think: snakes, spiders and other threatening animals, thunder and lightning, heights, and wide-open spaces. Modern-day humans don’t generally develop the same fears for more realistic threats to our health and wellbeing — cars, motorcycles, broken electrical equipment, household chemicals, or guns.

Work back in the ‘70s showed that conditioned fear responses — when a noxious stimulus such as an electrical shock is associated with ‘neutral’ stimulus, resulting in the expression of fear responses to the originally neutral stimulus — were far easier to elicit in response to photos of snakes versus photos of houses. There are suggestions that our fear of snakes is in-built, rather than something we learn as we grow up.

Interesting evidence points towards snakes guiding the development of the visual system in primates. Lynne Isbell is a neuroscientist from UC Davis and she’s written a book called The Fruit, the Tree, and the Serpent: Why We See So Well. Isbell explains,

Primates have good visual ability not because early primates were predators but because they were prey—notably of constricting snakes … we have superb vision because our own lineage within the primates arose in Africa/Asia, where the longest and most unrelenting evolutionary exposure to venomous snakes occurred.

I don’t know if this tells me much – but I can say that I was VERY quick to spot my python despite growing up in New Zealand one of the few snake-free landmasses on the planet… must be my primate genes?

The fear response can be tamed

In my search to understand my new-found fear of snakes, I was also quite keen to find out how I could overcome my jitters. Not liking the chances of my amygdala shriveling up, I came across a cartoon in the latest edition of Scientific American Mind , that gave me a good idea. I decided to try out very basic premise suggested in the cartoon ‘you can reduce your fear by associating positive experiences with the things you fear. It’s a process called fear extinction’.  I printed out a photo of my python (note I’m now referring to him in near friendly terms), pinned it to the pinboard in my kitchen and looked at it multiple times a day while going about my normal day-to-day activities – cooking, eating, reading about neuroscience and browsing Facebook…

I’m happy to report that couple of weeks later, it seems to be working.  I’m not performing my meerkat impression every time I walk out the door.  And, I can quite happily look at the photo without getting the heeby-jeebies!  Fear overcome! For now at least…

Finally, in my quest to understand the fear of snakes, I found the DH Lawrence poem ‘Snake’, which I think quite aptly sums up my hot hot day in late August …

A snake came to my water-trough

On a hot, hot day, and I in pyjamas for the heat,

But must I confess how I liked him,

How glad I was he had come like a guest in quiet, to drink at my water-trough

And depart peaceful, pacified, and thankless,

Into the burning bowels of this earth?

Was it cowardice, that I dared not kill him?

Was it perversity, that I longed to talk to him?

Was it humility, to feel so honoured?

I felt so honoured

And yet those voices: If you were not afraid, you would kill him!

And truly I was afraid, I was most afraid,

But even so, honoured still more

That he should seek my hospitality

From out the dark door of the secret earth.

Ohman 2009. Of snakes and faces: An evolutionary perspective on the psychology of fear. Scandinavian Journal of Psychology. 50: 543–552.   Isbell 2009. The Fruit, the Tree, and the Serpent: Why We See So Well.  Harvard University Pres.    Feinstein 2011, The Human Amygdala and the Induction and Experience of Fear. Current Biology 21, 34–38.