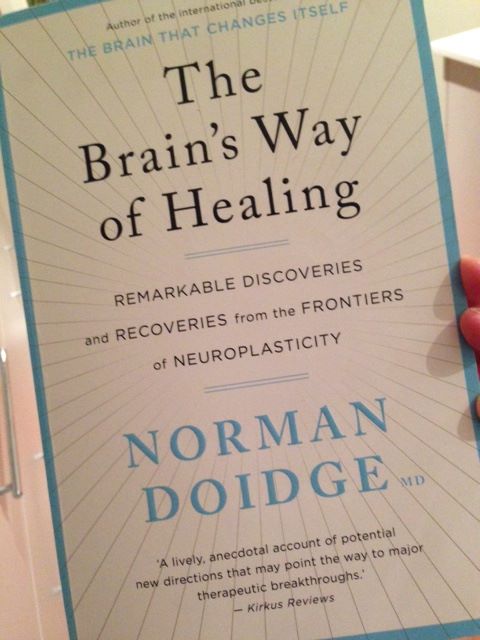 As I mentioned a couple of weeks ago, I’ve been reading Norman Doidge’s latest book ‘The Brain’s Way of Healing: Remarkable Discoveries and Recoveries from the Frontiers of Neuroplasticity.‘

Doidge’s first book, The Brain That Change’s Itself, has become one of the most popular science books around describing the phenomenon of neuroplasticity, and was largely responsible for bring the topic into public consciousness. I’ve lost count of the number of times people have told me they’ve read it and it was their main introduction to the world of neuroscience.

Doidge’s new book continues with the original themes such as ‘the mind changes the brain,’ and ‘neurons that fire together wire together, and ‘the brain has capacity to heal’.  As Doidge explains,

The Brain’s Way of Healing extends the reach of neuroplastic treatments, to provide new hope for people who suffer from many kinds of chronic pain, stroke, Parkinson’s disease, attention deficit disorder, autism, multiple sclerosis, traumatic brain injury, learning disorders, sensory processing disorders, balance problems and provides information on how to reduce the risk of dementia by 60%.

A few of the stories include:

The book has had a fpolarising reviews.

“Brilliant…Doidge has identified a tidal shift in basic science…The implications are monumental.” -The London Times

Others are more circumspect, such as this review by Harriet Hall on the Science-Based Medicine blog:

The idea that you can re-wire your own brain is a double-edged sword. It offers hope and empowerment, the sense that you can control your own destiny. But it lends itself to blaming the victim if the treatment is unsuccessful, suggesting the patient didn’t try hard enough. And it comes perilously close to New Age mind-over-matter create-your-own reality woo-woo.

Hope is a tricky commodity however, and while some of us may find it heartening, for others it could be another turn of the fatal screw. The neuroplastic revolution is part of a contemporary stampede towards the moralisation of medicine: patients are encouraged to blame themselves for their sufferings, and to think that their chances of recovery depend not on random tricks of fate, or the luck or good judgment of their doctors, but on their own willpower and moral fibre. Sick people need to be cared for, but they also have a right to be left in peace.

At the time of writing this blog post I’m still dipping into the book most evenings. I’ve been captivated by the storytelling and feel the same awe about the brain and the possibilities of neuroscience as I did when I read some of Oliver Sacks’ early work (which was HUGELY influential on me taking up neuroscience as a career). But I wonder if Doidge isn’t overreaching a little with the science at times (mostly in the chapter on cold lasers).

Personally, I couldn’t be more grateful to Doidge for giving one of my neuro-passions such a public platform. Before his first book came out, saying “My PhD looked at neuroplasticity in the developing brain,” was met with blank stares. I sometimes think Doidge’s book was partly responsible for people now falling over themselves to tell me how fascinating they find my thesis.

Because I LIVE for these debates, I’m choosing The Brain’s Way of Healing for the April Walking Book Club. As I’m no longer posting specific Qs about the Walking Book Club choices – I’ll try to garner more discussion and debate over on my FaceBook page – some come join in.

And if you need a reminder of the philosophy behind the Walking Book Club – click over to this page to learn a little more.