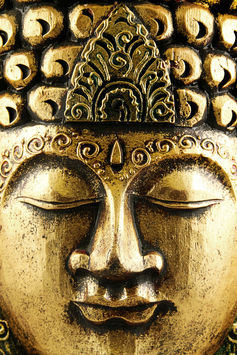 The Buddhist connection is one reason Mindfulness is so popular. Image from shutterstock.com

It’ll make you a better mother/writer/human being. It’ll calm the mind chatter. You won’t get so angry! You’ll be happier and healthier.

I’ve heard all this and more about mediation.  And the reasons why are pretty compelling!  But the thing is, I’ve tried meditating very occasionally over the years – usually at the end of a yoga session.  Sadly, I’ve always found it completely frustrating as I’d end up asleep and feel cranky when I woke.  No peace or calm, or life-changing realisations. I think I must be missing something …

So one of my new year resolutions (well, the only one I made to be honest), was to explore this world of mindfulness and mediation.  Both from a neuroscience perspective, and from a personal one.

I’ll blog about it as I go along.

So up first I’m reposting a copy of an article published in The Conversation by Sydney University researcher Dr Ramesh Manocha, author of “Silence your mind – a new approach to meditation that can improve your happiness, wellbeing and productivity – in just 10 minutes a day.”

Ever been unable to sleep because you can’t switch off that stream of thoughts that seems to flow incessantly, mercilessly through your head?

When your mental noise distracts you from the task at hand, makes you forget why you walked into a room, or keeps you awake at night, you’re a victim of what is known in the East as “the monkey mind”. It is this thought stream that, according to Eastern tradition, is the source of much of our modern day stress and mental dysfunction.

So, what can you do about it?

In the West, meditation has become a woolly term under which many different methods have found a home. Mindfulness is the latest, and certainly the most popular, addition.

Scientifically speaking, all approaches to meditation – be they relaxation, mindfulness, visualisation, mantras or otherwise – are associated with measurable but non-specific beneficial effects. So too are all stress management-style interventions even if they are not labelled as “meditation”.

So, does meditation have a specific effect or is it just another way to relax and de-stress? These are the questions that the scientific community continues to struggle with. Importantly, we can only answer this question if we have a clear understanding of what meditation is (or isn’t).

Our research shows that by defining meditation as “mental silence”, which is an evolution of the mindfulness concept, we can effectively answer the key scientific questions about meditation.

Mindfulness essentially involves the passive observation of internal and external stimuli without mental reaction. It is most explicitly, but not exclusively, laid out in Buddhist meditation texts.

Mindfulness has become immensely popular for several reasons: its connection with Buddhism, which is very much in fashion; its secular style; and its suitability as an adjunct to many other mental health counselling strategies such as cognitive behavioural therapy.

There is no doubting that mindfulness has a useful role to play in preserving health and promoting wellness. But despite its hundreds of clinical trials, there is no consistent evidence of an effect specific to mindfulness itself.

In fact, the vast majority of evidence concerning mindfulness relates to clinical trials that do not control for placebo effects. This is something relatively few researchers seem to want to talk about, either because it’s too difficult or too politically incorrect.

Perhaps surprisingly, the oldest known definition of meditation predates both Buddhism and mindfulness by thousands of years. In the ancient Indian Mahabharata, the narrator states that a meditator is “… like a log, he does not think”. In other words, the earliest definitions describe the key defining feature of meditation as an experience of “mental silence”.

Many other explicit examples of this definition can be found in Eastern literature from virtually every historical period. Lao Tzu, for example, urged us to “Empty the mind of all thoughts” in the Tao Te Ching.

Yet Western definitions of meditation have consistently failed to acknowledge its significance. Perhaps this is because of the predominance of the Cartesian dictum “cogito ergo sum” (I think therefore I am) that has come to characterise not only Western philosophy but the psyche as well.

This might explain why for most people in the West, including the academics and researchers on whom we rely to generate our scientific knowledge, mental silence represents both an alien concept and an illogical experience.

Yet the results of more than a dozen years of scientific research here in Australia tells us that mental silence-orientated approaches to meditation are in fact both achievable and associated with specific benefits above and beyond those seen in non-mental silence approaches.

Take, for instance, my 2011 Meditation for Work Stress Study, involving 178 full-time Australian workers; it’s one of the most thoroughly designed randomised controlled trials of meditation in the scientific literature.

Participants were randomly allocated to one of three groups: either mental silence meditation, a relaxation-orientated intervention (non-mental silence) or a no-treatment control group. Their stress, depressive feelings and anxiety levels were measured using scientifically validated measures before and after the eight week program.

While people in both intervention groups improved, those in the mental silence group manifested significantly greater improvements than the relaxation group and the no-treatment group.

A randomised controlled trial of meditation for asthma sufferers mirrored these findings by comparing mental silence-orientated meditation to a stress management programme promoted by the state department of health. Not only were the psychological improvements significantly greater in the meditation group but there was also a reduction in the irritability of the airways.

Although further work needs to be done to identify the mechanisms, this change is likely the result of the modulation of chronic inflammation pathways, presumably through altered signalling from the brain.

Other larger surveys as well as smaller trials also demonstrate promising outcomes – all pointing toward the idea that mental silence is the key defining feature of meditation, responsible for effects specific to meditation.

Brain studies report some interesting findings. First, the experience is associated with a characteristic pattern of brain electrical activity – increased alpha-theta activity at the front and top of the brain along the midline. This is associated with reduced anxiety and improved attentional focus.

There was also a strong correlation between these objectively measured electrical changes and the subjective experience of the quality of the meditation experience.

Second, meditators exhibit reduced stress responses in the brain compared with non-meditators. This implies that the benefits are occurring at a neurophysiological level rather than being just a suppression of emotion or of its peripheral features.

Meditators, therefore, seem to be fundamentally modifying the way they generate negative emotions in response to the environment.

Reduced negative emotional reactions to stimuli should logically lead to reduced stress and an improved sense of well-being. But until studies where the brain changes are simultaneously measured alongside clinical changes, we can’t definitively state that these brain changes are the cause of the specific effects uncovered in our clinical studies.

So how does this all fit together?

The mental silence paradigm is both complementary to and a progression of the mindfulness concept. While mindfulness involves the passive observation of stimuli with the aim of reducing mental reactions, mental silence involves progressing this experience to, and attaining, a state of no-mental-content-at-all, while remaining in full control of one’s faculties.

The original intention of mindfulness is as a method to facilitate the attainment of mental silence rather than being an ends in itself.

This shift in our understanding resolves many of the paradoxes that were hitherto insoluble – while at the same time offering consumers and clinicians a practically useful way to understand and benefit from meditation.

You can try the evidence-based techniques that we have evaluated for yourself by going to www.beyondthemind.com.

Ramesh Manocha is the author of Silence Your Mind, published by Hachette.

Ramesh Manocha is a regular meditator. He has received funding from the RACGP and the Barbara Gross Research Unit at the Royal Women’s Hospital in Sydney. All author royalties from Silence Your Mind are donated to research and education in the area.

This article was originally published at The Conversation.
Read the original article.

What about you? Do you meditate?  Any tips for a beginner?