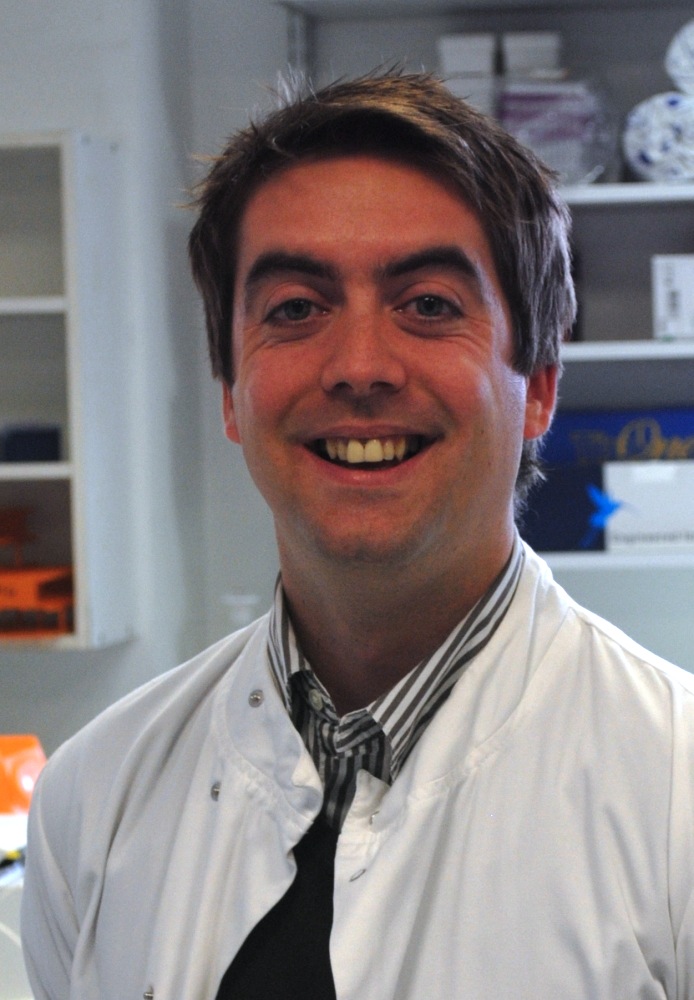 Meet Dr Matt Grubb. He’s one of my all-time favourite neuroscientists. Matt and I met in Oxford. We did our PhDs in the same lab, went to the same college, played in the same netball team, drank in the same pubs, and even starred in the same Christmas panto …

Matt was always going to shine as a neuroscientist, and part of his brilliance was what pushed me into science writing (mind you, I still aspire to write as well as he does). I’m incredibly proud of how well he has done, and will lay claim to giving him his first lessons in electrophysiology.

Matt heads up the Grubb Lab in Kings College London where he tries to figure out two things:

1. How the electrical activity that occurs in the developing brain has its dramatic effects on a neuron’s identity, its position, its shape, and its connections with other cells.

2.  How adult-born neurons can squeeze their way into a network of interconnected neurons that are already established, without messing that network up.

In his own words his research aims to “help to inform treatments trying to replace human cells lost through injury or disease.  If we’re trying to replace old cells with new cells, why not take a few hints from the way the brain does it all on its own?”
Tell me about your current position and how long have you been in there?

I was lucky enough to get a 5-year Career Development Fellowship from the Wellcome Trust to set up my own lab here at King’s College London.  That started in May 2010 so I’ve got about a year and a half of it left…

I want to understand how and why you ended up here working as a neuroscientist … tell me about your ‘journey’, what led you to this job?

I just kept doing the things I liked doing!

That’s the nice thing about science – your education actually gives you a pretty good idea of what it’s like and whether you enjoy it.

So I loved biology at school, especially the brain bits, then I essentially did a neuroscience degree, where I loved the cellular bits, and I’ve kept on with those cellular neuroscience bits ever since.

Love a clean result. That’s not necessarily a ‘good’ result, or the one you’re expecting, but you plan your experiments hoping that they’ll enlighten you a little bit instead of just making things more complicated. If you can go home feeling like you understand the brain a little bit better, that’s a good month (yes, things move that slowly in neuroscience!)

Now, on to the science! Give me a brief overview of your research/lab (and remember most readers are not scientists!)

We try to figure out how brain cells change as they develop.

Neurons have to adapt to all kinds of perturbations as they mature, and we try to figure out how and why these adaptations occur.

One of the best things about this job is the variety.  I’m a young group leader, so I still get to do ‘proper’ experiments in the lab – that’s pretty much the textbook stereotyped picture of a scientist, lots of microscopes, liquids in tubes and Bunsen burners.

But I also spend a lot of time supervising people in my group – training them on practical techniques, talking through their data and planning future experiments.

I might have a bit of undergraduate lecturing/tutorialling/marking to do.  Then there’s all the usual boring bureaucratic rubbish you have to do in any managerial job.

And finally if there’s a deadline looming or we’ve managed to put together an exciting (or at least reasonably coherent) story, I’ll spend time writing grant proposals for more funding, or manuscripts so we can publish our work.

Most of our funding comes from the Wellcome Trust, a UK biomedical science charity which is completely independent of government money.  This makes it much easier to convince my Dad we’re not wasting his taxpayer’s cash…

The ‘you only use 10% of your brain’ one is crazy – no-one knows where it originated, and there’s abundant evidence to show that it’s completely untrue.

But I get far more annoyed with people using pseudo-neuroscientific explanations for things – ‘you’re happy because of increased serotonin levels’ or ‘I think mainly with my right brain’.  These don’t really help anyone understand anything.

There’s a huge shift in the priorities of government funding agencies in the UK at the moment, where they’ve decided that taxpayers need to see some ‘results’ for the money put into research.  This means funding is moving away from basic science (e.g. ‘how does the brain develop?’) towards so-called ‘translational’ science (e.g. ‘how can we stop abnormal brain development?’).

There’s nothing wrong with translational work, but it doesn’t take a genius to figure out that it’s hard to translate a lack of understanding into any kind of concrete benefit.

Just in case it’s not obvious, we really don’t understand the brain very well at all yet.  Basic research might seem ‘pie-in-the-sky’, but without it you don’t get anywhere.

Best job in the world.

Matt’s explanation of his research for the non-scientist  and a visual of his science as demonstrated by Nobby the Knitted Neuron.