Guess what? You’re not your job. 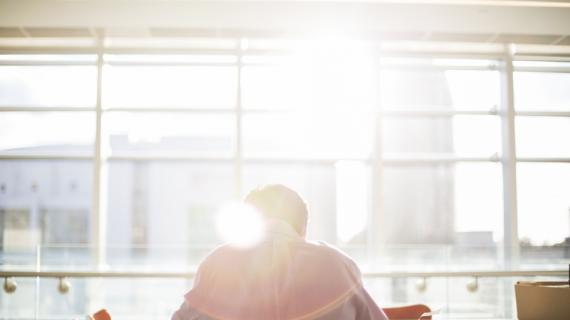 Thanks to Bek Lambert from Hacking Happiness for another savvy reminder of the blurring of the lines between work, home and self.

When you spend upwards of 50 hours a week at work, the separation between who we are as people and who we are as workers becomes difficult.

This is not surprising on paper.

After all, it is the lion share of what we do with our time when we’re awake. We make friends through the workplace and increasingly crave the happiness they provide. In fact, many of us (although reluctant to admit it outright) begin romantic relationships through work.

Plus it’s a source of praise, accomplishment, achievement and lifestyle sustaining currency.

Yet where do the lines of forming our identity around the work we do and work as a facilitator of our lifestyle blur?

The trap of work ethic

Our work ethic is designed by a cultural aesthetic of the Western World. As the hours we spend at work increase in Australia and continued messages of economic uncertainty and pressure on labour markets persist, we risk creating a cultural aesthetic that heightens the importance of a work-based identity.

As I’ve mentioned before, working long hours and not gaining sufficient rest cause all sorts of issues with our brain’s ability to think and judge situations effectively.

We’re choosing to buy in on the myth that working longer hours is an inherent part of productivity. Even while psychological and neurological evidence proves otherwise.

The language of work

The issue too is how we speak about work and how we allow work to infiltrate our leisure time. Workers are routinely praised for working all night. With the invention of smart phones and email, we’re increasingly connected to work requests. Our work mates are there on social media.

Certain sectors such as digital and marketing agencies, small business operators, and freelance and startup culture participants craft their time around work and regularly work through weekends, public holidays and evenings as part and parcel of these forms of career.

And salaries have become larger, but so too have the responsibilities and the requirements of time.

The beer fridge is now common in the common room for the all-nighters and the programs of worker support include work-life balance initiatives that centre on giving workers to access to dinner budgets, morning yoga classes and Friday arvo drinks.

However, much of this is window dressing around a culture that perpetuates not just long hours, but also how much we are defined by our work.

We still ask “what do you do?” as opposed to “what interests you?”

We still ask “how was work this week?” instead of “what gave you the most satisfaction?”

And we cling to job titles, business cards and pay bumps that justify increased time at the desk and away from family.

But the problem runs even deeper within the culture then we would like to realise. And unfortunately, it’s costing some of us dearly.

If work sucks, what then?

A recent study by Victoria University showed 1 in 3 entertainment industry workers qualify in a high risk category group for anxiety, depression and suicide. The main issues facing this group were workplace based which saw environments that were “unhealthy, often divisive, competitive, and lacking social support.”

The Australian Institute of Suicide Research and Prevention has reported that construction workers aged 15 to 24 are 2.38 times more likely to take their own lives than other young men of the same age.

Australia also has the unenviable title of having one of the highest recorded rates of workplace bullying. 6% of our working population cite long term bullying as a significant problem compared to 4% with other developed countries. And a Victorian study found 17% of all suicides were workplace related.

Factor in that the Australian Productivity Commission reports unhappy workers are costing between $6 billion and $36 billion each year in lost productivity. All because we’re underperforming or we’re skipping work because we’re stressed by the environment.

People are killing themselves over their careers. They’re certainly stressed, anxious and unhappy enough to cost a fortune or to put themselves at risk of serious mental health issues.

Yet it seems many of us feel as though we can’t make a change. For example, long term bullying is defined as receiving bullying for 12 months or more. This also was a key defining marker within recorded workplace related suicides.

So what is it about work or workplaces that keep us welded to the spot and working in conditions where overwork is acceptable and/or the only way out is through debilitating mental health issues or suicide?

Not everyone is going to have the ability to live their dream job. Not everyone will scale the pinnacles of career heights while balancing everything effortlessly on the side of the family and friendship fence. And yet the faith in the system allows us to fly a little too high to the workplace sun.

So what can you practically do to shake off your work as identity malaise?

Here are a few things you may wish to try:

Left untreated, tying too much of your identity to work can cause emotional problems. It can also make you less able to cope with life events with negative impacts. And it gives a fairly one dimensional outlook to a rather complex entity- the human being.

You owe yourself more than that!

Plus, we do live in a modern working world where people don’t stay in the same job from apprenticeship to retirement. And sometimes, that choice is made for us through redundancies, changes to the labour market, the influence of trends, illness and injury and a whole host of life born hiccups.

So having a teensy bit of mental fortitude and healthy detachment from work can really help.

Want to learn more about fostering a positive working experience? If you’re in Sydney, join me as Hacking Happiness, Beyond Blue, resilience researchers from the Sydney University and prominent change makers in the wellness community for ‘the myth of work-life balance in a get-ahead culture’. It’s on Sunday June 7th as part of Vivid Ideas.