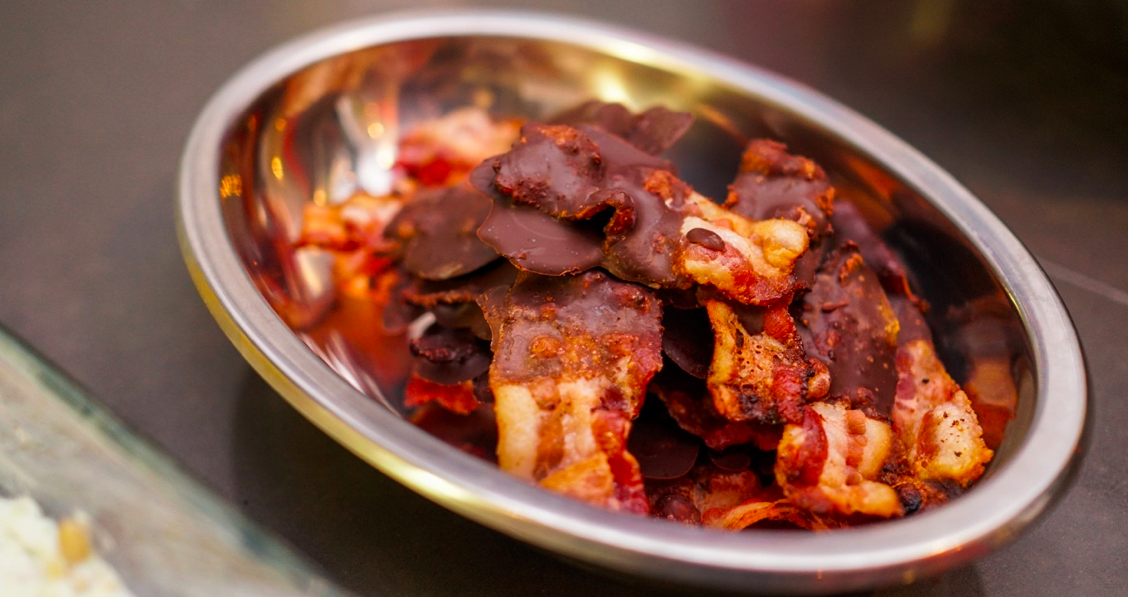 Is a diet where you can eat chocolate-dipped bacon AND lose weight too good to be true? Part 4 of our series on the gut-brain axis, diet and brain health.

On a “normal” diet, glucose is used for energy, so excess fats are used as a secondary fuel and often stored in adipose tissue. In a ketogenic diet, a low intake of carbohydrates induces the body into a state known as ketosis to power cells, including neurons. By transitioning the body to burn fat instead of carbohydrates (glucose), weight loss can be achieved.

Ketosis is initiated by the body to help us survive when food intake is low. Ketones (or ketone bodies) are made in the liver when the body uses fat for energy, and these can be used as an alternative energy source by cells.

To check that ketones are being produced, urine or blood samples need to be checked daily. However, small shifts in diet through increased carbohydrate consumption can quickly shift the body out of ketosis.

How does ketosis impact the brain?

Ketosis increases production of gamma-aminobutyric acid (GABA), which is an inhibitory neurotransmitter in the brain. Many anti-anxiety drugs such as benzodiazepines have a calming effect by mimicking the effects of GABA in the brain. So the theory is that increased GABA via ketosis may reduce stress and anxiety symptoms.

The ketogenic diet has been used since the 1920s diet as a well-established treatment option for children with epilepsy. Ketogenic diets reduce seizures in about a third of children who are unresponsive to standard antiepileptic drug therapies.

Although the mechanism by which ketogenic diets can reduce seizures is not fully understood, the increase in GABA may be central to their effectiveness.

Research suggests that ketones such as beta-hydroxybutyrate may be a more efficient fuel for neurons than glucose. In particular, ketones increase numbers of mitochondria (cellular “power houses”) in neurons helping them to function more efficiently.

Laboratory research on rats and mice suggests that ketogenic diets could potentially benefit a number of brain health conditions.

The mood stabilising effects of ketogenic diets may be useful in the treatment of mania and bipolar disorder. In particular, ketogenic diets can normalize neuronal excitability, increasing the synchronisation of neuron signalling.

High ketone diets fed to transgenic mice that develop pathologies seen in Alzheimer’s disease can normalize some brain changes, but no studies have been conducted with dementia patients yet. Ketogenic diets have been shown to enhance memory performance in adults with mild cognitive impairment, a major risk factor for the development of dementia including Alzheimer’s disease.

However, a 2017 review published in Frontiers of Psychiatry  exploring a role for the diet (KD) in treating anxiety, depression, bipolar disorder, schizophrenia, autism spectrum disorder, and ADHD in humans found “insufficient evidence for the use of KD in mental disorders.”

Despite a long rich history of using the diet to treat epilepsy, it has received little attention with few studies other than case reports, small sample size open studies, and no controlled trials.

Thus, the current best advice is: the ketogenic diet SHOULD NOT be implemented without the guidance of a medical professional and careful monitoring.

Animal studies suggest that the ketogenic diet may be useful to treat some mental health conditions, but the same studies also report animals maintained on ketogenic diets long-term show signs of chronic stress.

Although ketogenic diets can alter aspects of neurochemistry that may benefit the brain, neuroscientists still need to pinpoint the mechanisms by which these occur, and robust clinical studies in people are currently lacking.

Dietician Joe Leech provides a great overview of the keto diet (and its precursor ‘paleo’ on his website). Leech points out that although the diet has health benefits (e.g. epilepsy treatment), the average person is unable to maintain that diet for longer than one or two months. He says,