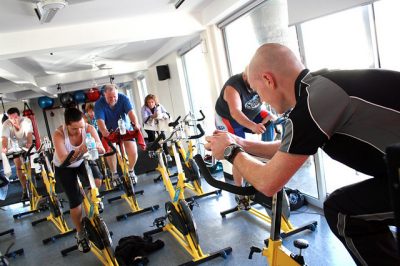 Don’t have time to exercise?

Remember the blog post I wrote about Tony Abbott, Barak Obama and Richard Branson and how they find time every day to exercise? I believe success goes hand in hand with exercise because the world’s most successful people exercise every day.

President Obama, possibly one of the world’s busiest people, works out for an hour – cardio one day, weights the next.

Newsflash! Obama, Abbott and Branson have the same number of minutes in the day as you and me!

If you can’t carve out 60 minutes from your day to prioritise exercise for health and success, think you could find 30 minutes to spin on a bike? How about just one session?

A single session of aerobic exercise changes the brain.

University of Adelaide neuroscientists have discovered that just one 30 minute session of spinning is enough to spark positive changes in the brain that could lead to improved memory and coordination of motor skills.

The study conducted by researchers in the University’s Robinson Research Institute found that stationary cycling caused the type of changes in the brain that allow for  plasticity.

Thirteen healthy people aged in their late 20s to early 30s were recruited to the project. Participants were allowed a 5-minute warm-up period followed by 2 × 15 minute blocks of cycling.

Before, immediately following, and 15 minutes following their cycle sessions the participant’s brains were monitored for changes.

“We saw positive changes in the brain straight away, and these improvements were sustained 15 minutes after the exercise had ended.

Plasticity in the brain is important for learning, memory and motor skill coordination. The more ‘plastic’ the brain becomes, the more it’s able to reorganise itself, modifying the number and strength of connections between nerve cells and different brain areas.”

What is interesting about the finding is that changes weren’t seen the part of the brain that controls the legs (as you’d expect if someone was cycling). Changes were seen in a different region of cortex, the part that controls the hands (which, apart from gripping the handlebars, weren’t moving).

Associate Professor Ridding says past research has shown that regular physical activity can have positive effects on brain function and plasticity, but it was unknown whether a stand-alone session of exercise would also have similar positive effects.

“This exercise-related change in the brain may, in part, explain why physical activity has a positive effect on memory and higher-level functions.”

Associate Professor Ridding says there is now mounting evidence that engaging in aerobic exercise positively influences brain function in many ways – at cellular and molecular levels, as well as in the brain’s architecture.

“We know that plasticity is also important for recovery from brain damage, so this opens up potential therapeutic avenues for patients.”

How does exercise promote brain plasticity?

The authors suggest that one potential mechanism for the exercise-induced modulation of inhibition might be via an increase in the release of neurotrophic factors. Neurotrophins are signalling proteins that shape neuronal structure and function throughout life.

The neurotrophin Brain Derived Neurotrophic Factor (BDNF) is known to be triggered by exercise and promotes neuronal differentiation, neuronal survival and synaptic plasticity.

But the researchers say that providing definitive proof for this hypothesis is problematic given that it is impossible to measure brain levels of BDNF in conscious human subjects.

Measurements of excitability and intracortical inhibition were made using non-invasive transcranial magnetic stimulation (TMS). Researchers assessed changes in corticospinal excitability following exercise (there were none) and short-interval intra-cortical inhibition (SICI) in the primary motor cortex (there was a significant reduction which was sustained for 15 minutes). The reduction in SICI was in the hand representation of primary motor cortex.

The authors believe these results provide some support for the hypothesis that a single bout of aerobic exercise reduces GABA-A-mediated intracortical inhibition, which may potentially underpin acute and chronic increases in neuroplasticity seen with exercise and physical activity, respectively.

The research paper ‘The influence of a single bout of aerobic exercise on short-interval intracortical excitability’ was published in the journal Experimental Brain Research.

Disclaimer – I added the bit about the spin class promoting neuroplasticity.  The participants were in the lab, not attending spin or soul cycle!