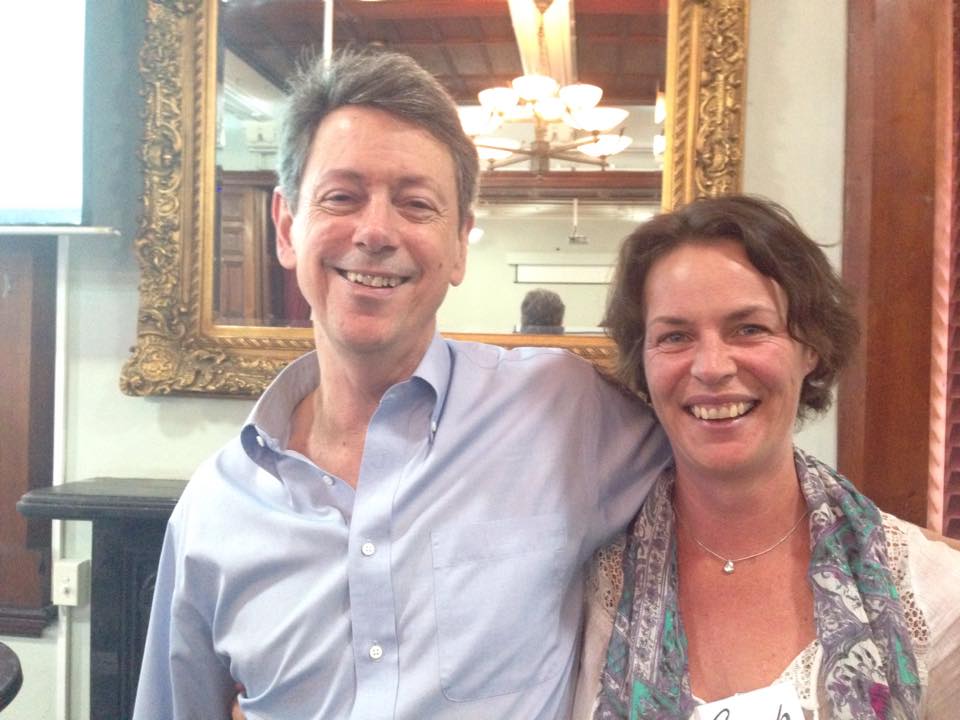 That’s me and Rick Hanson PhD, a neuropsychologist, Senior Fellow of the Greater Good Science Center at UC Berkeley, and New York Times best-selling author of the books Hardwiring Happiness: The New Brain Science of Contentment, Calm, and Confidence  and Buddha’s Brain: The Practical Neuroscience of Happiness, Love and Wisdom.

Rick was in Sydney recently teaching his Positive Neuroplasticity Training course just up the road from me at Manly Beach. Honestly, I went along thinking it was going to be a bit like attending a neuroscience conference but with beachside coffee and breakfast interview with Rick thrown in. I came away feeling like I’d had been in three days of therapy.

By changing your brain, can change your life?

Here’s a short summary of what Rick teaches, both in his books and his Positive Neuroplasticity Training courses:

“Our thoughts can change the structure of our brains.

Everything you do creates connections within the network of your brain, and the more you repeat something, the stronger that connection gets. These connections control our reactions, emotions, behaviours, and our overall well-being.

By learning to strengthen the positive connections, you can change your brain to be more positive.

Rick’s courses use science-based practices that he claims help you to,

“…re-wire your brain, changing the way you react, feel, and behave. These practices will give you lasting results in happiness, resilience, peace, and inner strength.”

By changing your brain, you can change your life.”

Sounds life-altering! But reading this made me wonder, is this all too good to be true?

What Rick said when I asked ‘show me the evidence’.

I caught up with Rick over breakfast one morning wanting to discuss the ‘gap’ I perceived that still exists between what neuroscientists would say constitutes neuroplasticity, and Rick’s claims.

It’s been argued (by this brain blogger for example) that people are very becoming fond of promoting ideas of ‘brain rewiring’, healing and ‘lasting change’, but mostly their arguments boil down to ‘Because: neuroplasticity!’ which doesn’t mean anything at all without a whole additional layer of explanation, refinement and qualification (an excellent discussion of which can be found here).

On top of that, it’s also become pretty easy to just substitute for the term ‘people’ with ‘the brain’.

So we could say: ‘Neuroscience has revealed lifelong brain plasticity’ but how does that differ from saying that ‘People can learn new things and change their behaviour no matter their age.’

Whole books and many blog posts have been written about the fact that we’ve become seduced by the lingo of neuroscience (read about it here,  here and here).

So with all that in mind, I said to Rick, “Look. I’m a neuroscientist. I’d like to discuss evidence … can our thoughts REALLY rewire our brain?”

“If there is a mental change, there MUST be a neural change, because all mental activity, including thoughts and feelings, requires neural activity.

There is a tendency for human beings to think that for something to be real you must be able to see or touch it. And that is understandable. But what it leads to is an underestimation of the power of mental change and the power of psychological interventions. We have hundreds of years of evidence for psychological change.

Some people also think you need an fMRI study to prove that there is change inside the brain, but plenty of other evidence shows us that the mind can change the brain.

And don’t forget Sarah, neuroscience is a baby science. Step back and look at the history of psychology … Freud, Young, Maslow and Skinner were all way ahead of the clinical interventions of there time. It was all very much ‘Do mental intervention A and get result C, presumably via box B.’ We’ve only filled in box B recently.

If you’re after a super rigorous, sceptical, scientific perspective, of which I’m a fan, there is a lot of animal research where you can induce a change in behaviour and then look at the brain of that animal and see, for example, synaptic changes—which is what I think you’re trying to get at here.”

Rick then referred me to a number of findings to support this argument, many of which can be found on his Wellspring Institute website (wisebrain.org). A loooong list of these research papers can be found here.

I see where Rick was coming from with his explanation, but we finished our conversation with me still feeling a little edgy about the whole thing. Sure! Thoughts change neural activity. That is the brain doing what the brain does. I guess I was still skeptical that my life (or brain) would change simply because his training program was compellingly called ‘Positive Neuroplasticity Training’.

But, I went along trying to keep my skeptical mind ‘open’ (as skeptics are so often told to do!!)

As an aside, I’ll add the warmth, generosity and gentle humour that you might sense in Rick’s writing is the real deal. And his calm, kind demeanour lasted all day long for three days. I’m kind of blown away that someone can lecture to a room full of people for three days straight and never seem to tire!! (An excellent example of someone who practises what he preaches!)

What happened at Positive Neuroplasticity Training.

The training consisted of three days of classes that combined experiential exercises, presentations and discussion.

The basis of the course is to learn how to turn passing good experiences into lasting inner strengths through Rick’s four-step HEAL process:

Rick believes one of the best ways to develop happiness and other inner strengths is to focus on experiencing them and then instilling them (remembering them, savouring them, turning them over and over in your mind).  And in time these good mental states will become neural traits.

You can try this out by mindfully attending to positive experiences in everyday life, using one or two dozen seconds to take in, say, a beautiful view (easy in Manly), a sense of accomplishment in your working life (I focussed on a online course I’m creating – The Neuroscience Academy), or the warmth of a child’s embrace (easy with my two boys), or just the calm and inner peace that comes from focussing on breath (something I’ve always STRUGGLED with, but found very easy to do with Rick’s guidance).

The idea is if you ‘take in the good’ you’ll develop greater overall wellbeing and build up inner resources that help address personal issues such as stress, anxiety, irritation, frustration, loss, blue mood, loneliness, hurt, or inadequacy (the crap I discovered we ALL deal with in one form or another. I was blown away by the intimate discussions I had with so many other people there … how we’ve all got something we struggle with, and how we all desire to connect and share).

Rick and his team have been busy study the impact of the course (science!!). They’ve compared the psychological wellbeing of people who’ve taken the course and compared it to people wait-listed to take the course:

Much of this happened to me too!

As I said at the beginning of this blog post, I came away feeling like I’d been in three days of therapy. Not drained, crying-my-eyes out therapy. But really GOOD therapy. I felt calmer, kinder, less frazzled, gentler and more compassionate. I was definitely more sensitive to finding ‘the good’.

During the three days we covered a LOT of ground. I didn’t make many notes, but a few statements made by Rick struck me. The first was at the very beginning of the course when he asked, in what I came to learn was his typical warm manner,

“Hands up who here meditates at least one minute per month”.

All I could think was ‘Phew‘.

He followed up by saying we should all be kinder in our expectations of ourselves—something that rang true with me. I’m the classic overachiever who feels like they’ve failed after 15 seconds of trying to meditate, and then failing to keep thoughts running through their head! Rick pointed out that those of us at the very beginning of our practise need to first learn to focus on just 5 or 10 breaths at the time. That’s an OK place to start.

Rick also spoke a lot about staying in the ‘green zone’. He defines the ‘red zone’ as the internal mind-body state that activates when we’re stressed. The ‘green zone’ by contrast is calm and peaceful. You can learn to ‘activate’ the green zone with calm, attentive breath and by ‘taking in the good’. He believes it’s healthier to be in the ‘green zone’ and that there are ways to train ourselves to stay there despite outer turmoil. We can learn to become responsive and not reactive.

One of the most striking comments he made was,

“Don’t casually indulge the red zone. Much of fear is unnecessary and unreasonable. We tend to overestimate threats and underestimate opportunities and resources.”

Just think about that for a while. Gives me shivers.

That statement sits very nicely with one of his more well-known teachings,

I could go on and on here. But it’s probably fair to say Rick Hanson’s positive neuroplasticity training changed my mind. Although whether or not ‘for the good’ remains to be seen!!

As for the curly question about *evidence* of change in my brain … well, right now, I’m in two minds about whether or not it even matters!

Obviously I had a great experience with Rick’s training, thoroughly enjoyed meeting him and learning from him. And if others attend his trainings and read his books because of the use of the word ‘neuroplasticity’ and find it helps them to ‘take in the good’ – then GREAT. Go for it. Naturally, spending three days reflecting and being mindful is good for your mood. Although I’m unsure whether alone it can invoke permanent neuroplastic change. As others have repeatedly cautioned, we must be careful not to fall for ‘neuroplasticity hype’ or inflate its significance far beyond the current neuroscience understanding. But once in a while it’s nice to close off the skeptical mind, let go, and breath without questioning.