The myth of multi-tasking. 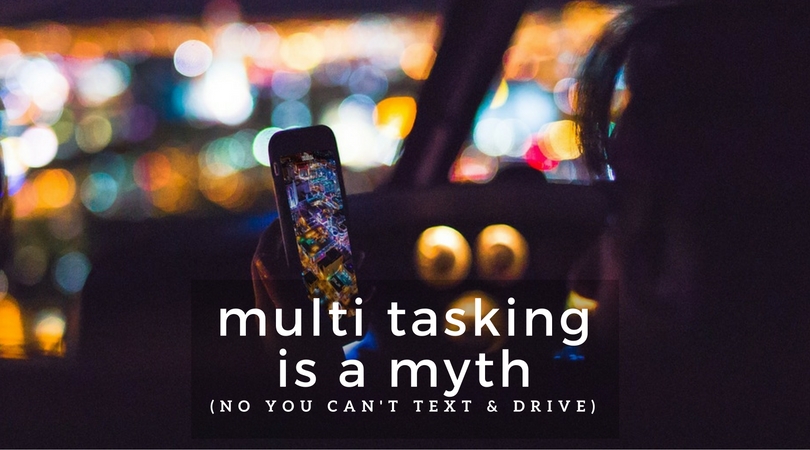 Last month I was invited to speak to a group of young people brought together to create innovative road safety solutions for their peers.

The problem they are trying to solve is this:

Consider that problem in light of these stats, (data from Queensland Government, Australia):

I spoke about attention and multi-tasking and why it’s IMPOSSIBLE for most of us to multi-task (even though many of us think we can).

After I spoke, the session broke into groups to brainstorm powerful, emotional, and out-of-the box ideas to share and engage with their peers. I was involved in a similar campaign in 2015, and THIS was the result.

Here are some of the ideas I shared this year.

Attention is what you choose to focus on. Or what you’re currently thinking about or concentrating on. It’s useful to think of attention as being like a torch or flashlight. In particular, the type of torch that has an adjustable beam of light. Like a beam of light, your attention,

Imagine you’re driving a car. Like the beam of light, your attention could be external, broad and diffuse — perhaps scanning the patterns of traffic on a motorway deciding whether to stay in your lane. Or it might be tightly focussed and defined — you might be intently watching and waiting for a traffic light to change. Your attention could also be focussed internally on your own thoughts — perhaps a mental map to help navigate your journey. Or it could be narrowly and internally focussed — trying to remember a shopping list to pick up on the way home.

Whilst our attention is reactive — we respond to external stimuli such as the beeping horn — the key is to switch attention and selectively focus on what is appropriate (hint: this isn’t a text message that arrives when you’re driving!).

What happens when we  distract ourselves when driving?

Talking on a mobile phone while driving is an ill-advised activity that many people believe they’ve mastered.

Sure, you can check Facebook while eating your lunch, or listen to music while walking the dog. But innate activities such walking, chewing, and breathing don’t require you to selectively shine your beam attention. Activities such as reading, tapping out a text message, or driving a car DO require attention.

Data gathered over a number of years by David Strayer, Professor of Psychology at the University of Utah and his team support this. They observed thousands of drivers as they approached a variety of intersections, and saw the majority of drivers who were talking on their phone failed to stop in accordance with traffic laws. And it didn’t matter if the driver was using a handheld or hands-free device — even with both eyes on the road and both hands on the wheel, drivers’ performance was impaired. (Interestingly, the same result isn’t seen when chatting to a front seat passenger, presumably they’re also focussed on the road, have a vested interest in driving safely, and change their behaviour according to road conditions.)

Talking on a mobile phone while driving is the classic example of multi-tasking gone wrong. Other studies have show the following happens:

Try this game to prove multi-tasking is impossible.

Many people don’t believe that the above research apply to them. They believe they’ve mastered multi-tasking.

Here’s a simple task to try with that shows how difficult it is to split your attention between two seemingly simple tasks (it’s guaranteed to generate a few laughs, as well as drive the point home!).

Watch carefully and you’ll notice a number of things: they’ll make more mistakes, they’ll slow down, and they’ll probably become rather stressed (they’ll laugh, blush, or even refuse to finish!).

This is a clear example of what happens when we try to divide our attention (beam of light) between two cognitive (thinking) tasks. We can’t split our attention into two, instead we switch back and forward between the two tasks and performance in even the most simple tasks drastically deteriorates.

What’s going on in the brain when it tries to multi-task?

Neuroscientist Etienne Koechlin lead researcher on this study says it demonstrates that while the brain can switch back and forth between two tasks,

“…we might be in great trouble when we try to juggle more than two tasks, simply because we have only two frontal lobes.”

Multitasking doesn’t just slow you down and increase the number of mistakes you make; it temporarily changes the way your brain works!

Other researchers who study attention say that effective multi-tasking is nearly impossible. Psychiatrist Edward M. Hallowell describes multi-tasking as a

“…mythical activity in which people believe they can perform two or more tasks simultaneously as effectively as one.”

I surveyed the the attendees at the CoLab meeting and asked them what percentage of the population they believed could effectively multi-task. Their answer of “about 50%” is in line with how most people respond. Unsurprisingly, most people place themselves in this skilled but mythical subgroup. The reality is very different. David Strayer has found only 2.5% of the population is able to multi-task.

For most of us, our brain simply isn’t capable of paying close attention to more than one complex task at a time.

My message is simple: put down the phone. (I can’t wait to see what the creative CoLab campaign comes up with!)

Parts of article were originally published in Active Memory.