8 ways to encourage a growth mindset in kids. 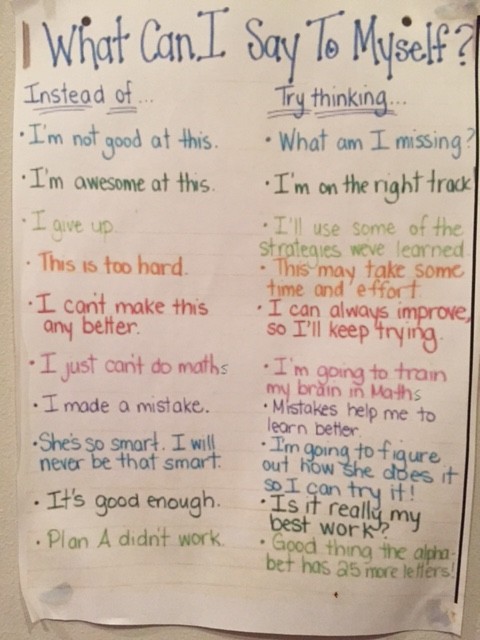 Of all the topics I’ve written about over the years, how to foster a growth mindset in our children is probably the one that has generated the most positive feedback.

And this is the piece that has had the biggest impact on my parenting. I have the poster above tacked to the wall in our kitchen. And I often find my boys rolling their eyes at me in the backseat of the car after I remind them yet again that their brains grow and learn by effort, practice and hard work (“We KNOW Mum! You already told us.).Fixed versus growth mindsets

Dr Carol Dweck, a professor of psychology at Stanford University and author of the book Mindset: The New Psychology of Success, studies mindset in children. She believes children are similar to adults in that they have one of two possible mindsets—a fixed mindset or a growth mindset.

Kids with a fixed mindset believe they’re ‘smart’ or ‘dumb’, talented at something: painting, music or football, or not. They may believe the world is made of some gifted people, whom the rest admire from the sidelines.

Conversely, kids with a growth mindset appreciate anyone can build themselves into anything they want to be. They recognise that people aren’t ‘smart’ or ‘dumb’, that there are no talented geniuses; only hard-working people who have chosen to take their abilities to the next level.

Dweck’s research shows that students’ beliefs about intelligence play an important role in their school achievement, engagement, and happiness.

“We found that students’ mindsets—how they perceive their abilities—played a key role in their motivation and achievement, and we found that if we changed students’ mindsets, we could boost their achievement. Students who believed their intelligence could be developed (a growth mindset) outperformed those who believed their intelligence was fixed (a fixed mindset).”

Since Dweck’s ideas first gained traction (and then took off like a rocket to the moon), they’ve been somewhat downplayed. In 2015, Dweck commented that as the growth mindset becomes more popular, she has become much wiser about how to implement it.

This learning—the common pitfalls, the misunderstandings, and what to do about them—is what I’d like to share with you, so that we can maximize the benefits for our students.

Click here to read Carol Dweck Revisits the ‘Growth Mindset’ in which she makes the following comments:

Recently, someone asked what keeps me up at night. It’s the fear that the mindset concepts, which grew up to counter the failed self-esteem movement, will be used to perpetuate that movement.

How can we help educators adopt a deeper, true growth mindset, one that will show in their classroom practices? You may be surprised by my answer: Let’s legitimize the fixed mindset. Let’s acknowledge that (1) we’re all a mixture of fixed and growth mindsets, (2) we will probably always be, and (3) if we want to move closer to a growth mindset in our thoughts and practices, we need to stay in touch with our fixed-mindset thoughts and deeds.

While most kids sail through adolescence, a significant proportion disengage from school and with that comes declines in academic results and self-esteem. When Dweck and her team explored the role of mindset belief in adolescents they found that even when students on both ends of the fixed- versus growth-mindset continuum showed equal intellectual ability, their beliefs predicted their school performance.

In one study, Dweck compared two groups of 12-13 year-olds entering high school who been assessed as having either fixed or growth mindsets. The growth-mindset group improved their maths scores over the course of the study, whereas the fixed-mindset group showed poor motivation and a decline in grades.

In a second study, Dweck’s team reversed the decline in maths scores by staging a simple intervention—students were coached on growth versus fixed mindsets. They were told that every time they learn something new their brain forms new connections and that over time their intellectual abilities can be developed. A control group was taught study skills. After the training, the control group continued to show declining grades, but remarkably, the growth-mindset group showed a significant upsurge in their motivation to learn and their grades.

How to praise the right way

One key to coaching mindset beliefs in children lies in how parents and teachers praise and motivate children.

“Many of the things we do to motivate our kids are sapping their desire to learn,” says Dweck.

It was once thought telling children how smart they are would give them confidence in their abilities, the desire to learn, and the hardiness to withstand difficulty.

“The self-esteem movement got it wrong. Praising children’s intelligence may boost their confidence for a brief moment, but by fostering the fixed view of intelligence, it makes them afraid of challenges, it makes them lose confidence when tasks become hard, and it leads to plummeting performance in the face of difficulty”

Research shows that praising the process—children’s effort or strategies—creates an eagerness for challenges, persistence in the face of difficulty, and enhanced performance.

“What we’ve found in study after study is that ability-praise backfires. Emphasising effort gives a child a variable that they can control. They come to see themselves as in control of their success. Emphasising natural intelligence takes it out of the child’s control, and it provides no good recipe for responding to a failure.”

8 tips for promoting a growth mindset in kids:

As a parent or teacher what triggers YOUR fixed mindset?

Dweck also offers the following advice for educators and parents when considering our OWN fixed mindset triggers.